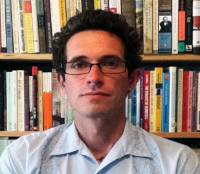 Ryan Chaney is an assistant professor at Kingsborough Community College in the Department of Behavioral Sciences. His field is cultural anthropology, with specializations in the representation of folk cultures and senses of place in the popular American imagination and the politics and poetics of creating and using urban and rural spaces in the contemporary U.S. He has been a member of the Kingsborough faculty since the fall of 2011, teaching introductory, four-field anthropology, writing-intensive anthropology, and urban sociology on-line. He received his Ph.D. in anthropology from Columbia University in May of 2008. He is currently working on a book about folk musics and heritage tourism in Southern Appalachia and conducting ethnographic research on changing senses of place in New York City’s outer boroughs after Superstorm Sandy.

Columbia University, Dept. of Anthropology, The Road: Anthropology of an American Trope (2009)

n.d      ‘Nobody Wants This To Turn Into Dollywood’: Regional Politics of Cultural Preservation and Sustainable Development.