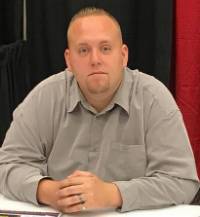 Patrick Hickey Jr. is a full-time Lecturer of English and Director of the Journalism program at Kingsborough Community College and is the Founder and Editor-In-Chief of ReviewFix.com. He's also a former News Editor at NBC Local Integrated Media and National Video Games Writer at Examiner.com where his work was mentioned in National Ad campaigns by Disney, Nintendo and EA Sports.

Hickey was also the Editor-In-Chief of two College Newspapers before he received his BA in Journalism from Brooklyn College. Hickey's work has been published in The New York Daily News, The New York Times, Complex, The Hockey Writers, Yahoo!, Broadway World, Examiner, Bay Currents Newspaper, where he served as the paper’s Sports Editor, the Brooklyn Papers, the Wave of Long Island, Brooklyn Free Press, Blasting News, Tri-Games.net, The Lo-Down, the Brooklyn View, NYSportsday.com, NYSportScene Magazine, ProHockeyNews.com, GothamBaseball.com, The Syracuse Post-Standard, BBallCentral.com, PlayLikeAGirlSports.com, NYCityWatch.org, Scout.com and the official sites of the Brooklyn Aces and New York Islanders.

Hickey is also a contracted comic book writer, currently penning his original series, "Condrey," as well as "The Job" and "KROOM" for Legacy Comix, where he serves as founder and co-owner.

Hickey Jr. is a voice-actor, having starred in the 2018 indie hit and 2019 Switch, PS4 and Xbox One release, The Padre (also serving as English language Story Editor), from Shotgun With Glitters. The sequel, The Padre: One Shell Straight to Hell was released in February 2021 and Hickey also serves as a Story Editor and Lead Voiceover performer. Hickey is currently writing the story for the upcoming game, KROOM, where he will also be performing voice-over duties. Hickey also plays the role of Rex in the upcoming indie game "Relentless Rex," and served as the narrator in "The Kaiju Offensive," which hit Steam in 2019.

President of the Society of Collegiate Journalists, Kingsborough Chapter 2005-2006