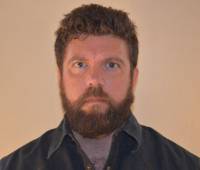 Eben Wood studied creative writing at the University of Michigan, Ann Arbor, where he received his MFA in Creative Writing (Poetry). After teaching for several years at the Athenian School, in Danville, CA, he returned to Michigan for his PhD. in English Languages and Literatures. His doctoral dissertation, “Black Abstraction: The Umbra Workshop and an African-American Avantgarde,” was completed under the supervision of Dr. Alan Wald and Dr. Marjorie Levinson. Dr. Wood attended the 2001 School in Criticism and Theory at Cornell University, where he studied globalization with Perry Anderson, and was a 2001-2002 Fellow at the Institute for the Humanities, the University of Michigan, Ann Arbor. Since 2004 he has been a member of the English Department faculty and of the Program in Women’s Studies at Kingsborough Community College, The City University of New York.

In addition, Prof. Wood has taught a number of one-semester seminars in cross-genre creative writing and the literatures of New York City.

“Grimonprez’s Remix.”  In Terrorism, Media, and the Ethics of Fiction: Transatlantic Perspectives on Don DeLillo(Continuum, 2010).  Reprinted in It’s a Poor Sort of Memory That Only Works Backward: A Johan Grimonprez Reader (Hatje-Cantz, forthcoming 2011).

A Roundtable on Brooklyn and Development
Kingsborough Community College, The City University of New York
October 13, 2011

“The Soul is the Size of Elsewhere”: Brooklyn and Development, An Exhibition
The Art Gallery
Kingsborough Community College, The City University of New York
September-October, 2009

American and African-American literatures; history of the avantgarde; modernism and postmodernism; cross-genre writing, film, and photography; contemporary American art; urbanism and urbanization; globalization and cultural diasporas; history and culture of the Korean War.