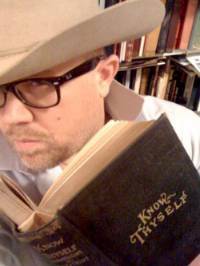 Dr. Brian E. Hack was born and raised in Huntingdon, a small but well-meaning town nestled in the hills of Central Pennsylvania. By all accounts a peculiar and annoyingly gregarious child, he baffled and confounded the majority of adults he encountered who were, and in many ways still are, unsure how to take him. In high school he was voted “Most Likely to be Least Likely,” the superlative that spurred him on to find various and mildly rewarding jobs bagging groceries, mowing lawns, and changing the holes on golf course greens. When he eventually ran out of places to put the holes, he decided college was where someone of his temperament belonged, and he has been studying in, or working for, colleges ever since. With little outward but much inward aplomb he bravely ventured from that tiny hamlet into the wicked world of wolves and wonderment that is Manhattan. Despite being somewhat out of sync with city life and possessing little ambition other than a few misdirected enthusiasms, he miraculously received his doctorate from The Graduate Center of the City University of New York in 2007. His dissertation, “American Acropolis: George Grey Barnard’s Monument to Democracy, 1918-1938,” examined a mammoth but uncompleted peace memorial envisioned by one of the nation’s most imaginative sculptors.  For while he cared not a whit for the bustle-and-hustle of the urban existence into which he had haphazardly thrust himself, he did develop a keen interest in sculpture—of bronze and marble monuments of people from the past  whose well-appreciated silence spoke volumes. In addition to his study of sculpture and public monuments of the late nineteenth- and early twentieth-centuries, he is interested in the impact of Darwinism and eugenics on American art, in nineteenth century stereoscopic images, and in various other forms of ephemera from this period. Since 1999 he has taught at Kingsborough Community College, where he is fueled by substantial amounts of coffee and by the desire to instill in his students a sense of purpose and an appreciation for art and ideas.

Art 95: Modern Architecture and the Environment

The impact of Darwinism and Eugenics on American Art