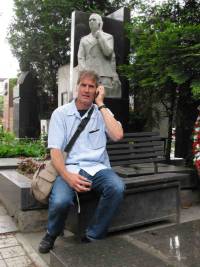 Selected Publications and/or Other Resources:

Lenin: The Man, the Dictator, and the Master of Terror by Victor Sebestyen, The Christian Science Monitor (November 13, 2017)

The Enchanted Wanderer and Other Stories by Nikolai Leskov, translated by Richard Pevear and Larissa Volokhonsky, San Francisco Chronicle (March 31, 2013)

Mickey and Willie: Mantle and Mays, the Parallel Lives of Baseball's Golden Age by Allen Barra, Class A by Lucas Mann and Color Blind by Tom Dunkel, San Francisco Chronicle (May 17, 2013)

Mightier Than the Sword: Uncle Tom's Cabin and the Battle for America by David S. Reynolds, San Francisco Chronicle (July 3, 2011)

"Reshaping Students in Our Own Image," Chronicle of Higher Education (April 22, 2013)

"Getting to Know Marvin Mudrick," Changing English: Studies in Culture and Education (June 2008)

"Franz Kafka: 'In Spite of Everything Writing Does One Good,'" Whistling Shade (Spring 2006)

"A Few Words of Advice from Anton Chekhov," The Writer Magazine (September 2004)

"Jorges Luis Borges: On Dreaming as Writing and Writing as Dreaming," Literary Imagination: The Review of the Association of Literary Scholars and Critics (Fall 2003)

"Red Marks in the Margins: A Professor's Take on the Evolutionary Art of Grading," Christian Science Monitor (Dec. 17, 2002)

"Me and Mister Thoreau," The Thoreau Society Bulletin (Winter 2002)

"Teaching Dostoyevsky Through a Prism," The Chronicle of Higher Education (April 27, 2001)

"Learning to Roll with 'Oedipus,'" The Chronicle of Higher Education (August 3, 2001)

Great Short Poems from Around the World (Dover, 2013)

Co-Editor (with Odette Blaisdell), The Wit and Wisdom of Oscar Wilde (Dover, 2012)

The Wit and Wisdom of Abraham Lincoln (Dover 2005)

The Wit and Wisdom of Anthony Trollope (Blackthorn Press 2003)

The Communist Manifesto and Other Revolutionary Documents (Dover 2003)

Classic Tales and Fables for Children by Leo Tolstoy (Prometheus 2001)

From the Russian, two children's stories by Lev Tolstoy, "The Girl and the Mushrooms" and "How the Boy Told How a Thunderstorm Caught Him in the Woods," Russian Life (October 12, 2016)

From the Russian, children's story, "How Auntie Told Granny about How the Bandit Yemelka Pugachyov Gave Her a Ten-Kopeck Piece," by Lev Tolstoy, Chtenia (Winter 2012)

Poems from the Spanish and the Russian ("Touch" by Octavio Paz; "I Loved You" by Alexander Pushkin), in Dorothy Belle Pollack's Best Short Poems of All Time (Dover 2011)

George Newlin's Everyone and Everything in Trollope, Volume IV: The Complete Nonfiction and the Topicon (M.E. Sharpe 2004)

Excerpt, "Marvin Mudrick Believes in You, Believe It or Not," from Well, Mr. Mudrick Said … A Memoir, Los Angeles Review of Books (September 14, 2011)