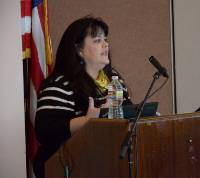 Maureen E. Ruprecht Fadem (she/her) completed a Ph.D. in English at The Graduate Center-CUNY under the mentorship of Wayne Koestenbaum. She is Professor of English at Kingsborough-CUNY and a postcolonial scholar; she works on Anglophone writing of the late twentieth and twenty-first centuries and is a specialist in historical literature, particularly that of Ireland and African America, and the literatures of partition more broadly. Maureen’s research looks at imperial borders and national partitions, at political justice, especially reparations, at social justice of race, class, and gender, and at the poetics of conflict, trauma, and silence in poetry and prose. Maureen often presents her work at conferences and will chair and introduce a session she organized for the 2023 MLA Convention: “Political Threats to Academic Freedom; or, A Call for Antiracist Advocacy.” Her monograph Silence and Articulacy in the Poetry of Medbh McGuckian was brought out by Rowman and Littlefield in 2019. In 2020, Routledge published Maureen’s book titled Objects and Intertexts in Toni Morrison’s ‘Beloved’: The Case for Reparations as well as the collection she co-edited with Michael O’Sullivan, The Economics of Empire. She also has two recent articles: “Architecting the Carceral State: The Fragment in Medbh McGuckian’s Diaries and Walter Benjamin’s ‘Theses’” appeared in the journal Review of Irish Studies in Europe (2021), and Maureen’s opinion piece “‘Going Public’ with the Humanities in a Fake News World” was published by Inside Higher Ed (April 4, 2022). She is at work on three projects: a collection titled Imperial Debt on reparations for empire, a book series based on the same theme, and she was commissioned as editor for The Routledge Research Companion to Toni Morrison. Also under development is a comparative chapter on Joyce’s “The Dead” and instances of postcolonial fiction that use as chief allegory a redolent triptych from that story: snow, silence, and sleep. Maureen is currently serving a three-year term on the MLA Committee on Academic Freedom and Professional Rights and Responsibilities (CAFPRR). Before entering academia, she worked in the business world while raising her children on her own, Dr. Cynthia Fadem and Brooklyn restaurateur, Mike Fadem. She lives in Brooklyn

Maureen is a member of the Honors faculty and often teaches Writing Intensive and Civic Engagement designated courses. She most often teaches college composition: English 24 and 93, most recently, and English 12 numerous times in past years. Professor Fadem also teaches various literature courses, including English 30, Introduction to Literature; English 32, World Literature; English 40, The Short Story; and English 77, The Roots of Black Literature. Starting in Spring 2015, Maureen will begin teaching courses in the Early College Program at Leon M. Goldstein High School.

“Provincializing the Nation-State: The Meaning of Partition.” In Synthesis, Special issue on “Living through the Interregnum." Volume 8, Fall 2014.

“Self-Contradiction in a Small Place: Anne Devlin’s ‘Other at the Edge of Life.’” Affecting Irishness: Negotiating Cultural Identity Within and Beyond the Nation. Eds. James P. Byrne, Padraig Kirwan and Michael O’Sullivan. New York: Peter Lang, 2009. 291 - 312.

“Translation, An Art of Negativity: A Conversation with Meena Alexander.” Nimrod International Journal of Prose and Poetry, 45.2 (Spring/Summer 2002): 102 – 110.